This chili recipe is adapted from my dad's chili recipe
About 3 years ago, I had him show me how he made his chili
Back then I used whatever beer was in the house (miller lite)
I think I even used bud light lime once

Over time, I've tweaked it into something of my own
He hasn't tried it yet, but I think this is the recipe to share with him

Now.. here in Texas.. a good chili recipe is GOLDEN
Not many are likely to share if you're competitive
But the whole purpose of this blog is for me to share my recipes with the masses
So I can't possibly keep this to myself
So, if you make it and you like it and you enter it into a chili cook-off
and you win..
just cut me in! (JK)

﻿As with most of the recipes I post lately, I found this one on Pinterest
I used to clip recipes out of magazines, now I just go see if it's online
if so, I pin it to my recipe board

This latest recipe originated from the cozy apron blog

Besides,  I use italian sausage in all my italian dishes that call for meat
Also, I love the brightness of onions, red, orange & yellow bell peppers
Finally, who doesn't love cooking with wine?

﻿ ﻿
Last month, I was reading this article
on Kate Spade's blog
about Zabar's

So, I've never been to Zabar's
but I know it's a place I want to go to when I do
visit New York someday

So, of course, I simply had to order this
Kate Spade Tote Bag from Zabar's

The bagels are amazing.  I ate one the next day, then put the rest in the freezer.
I still have one left.

I took the Chocolate Babka to a winery with a friend.
It was lovely with red wine and conversation
﻿
I am not a coffee drinker, but my son loves it

My 11 year old niece and I shared the NY cookie - so awesome!

The tote is too cute for school...
I love carrying a piece of New York with me to the market

This was so fun that I ordered one for my bestie in North Carolina!!!
at September 25, 2013 No comments: Links to this post 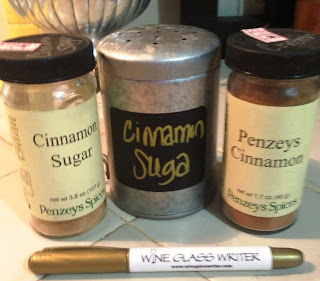 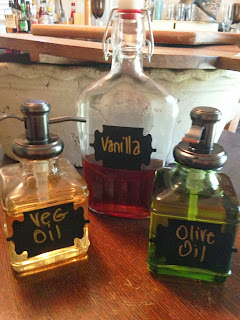 I've seen on the cooking shows how everyone has clever bottles to store their oils.

I bought the veg oil and olive oil bottles
at Target in the bath section for 12.99

The labels were like at World Market for 3.99
I just use a gold marker that I got to write on wine glasses

The vanilla bottle was bought at Ross for 1.99
I made my own vanilla about 2 years ago

I've been doing so every since!

I've started using these labels on all containers in my kitchen
(flour, suga, dawg biskits, etc) 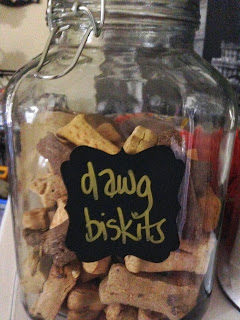 That chill in the air makes me want to cook soups, stews and chili's
I hesitated thinking that maybe it's not quite that cool yet
but remember we're doing all we can to nudge that cool air in

craft beers and local breweries are all the rage right now

(All who know me  KNOW I'm more of a wine girl with little interest in the better beers)
Lately, I've gotten adventurous and starting trying out different beers
(other than miller lite or michelob ultra)

My new favorite is Blood and Honey by Revolver.
﻿﻿
﻿﻿

So, I actually did a little research

I knew I wanted to make
chili, jalapeno muffins and a pumpkin cake

I needed to determine what type of beers would go best in each
and then...
find the local beer that would be perfect

One of my favorite sites right now is
The Beeroness

It's needs to be STOUT
Boy, is the Lakewood Brewing Co's Temptress
the BEST beer for chili

I made the chili from scratch. I will provide the recipe in a post later in the week

I cannot help it, I see something new in the store, I have to try it once

I mixed 2 cups powdered sugar to about 1/2 cup of milk
then added the beer extract
I'm not going to lie
It was VERY strong.. but the sweetness of the icing calmed it down 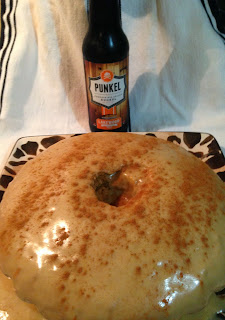